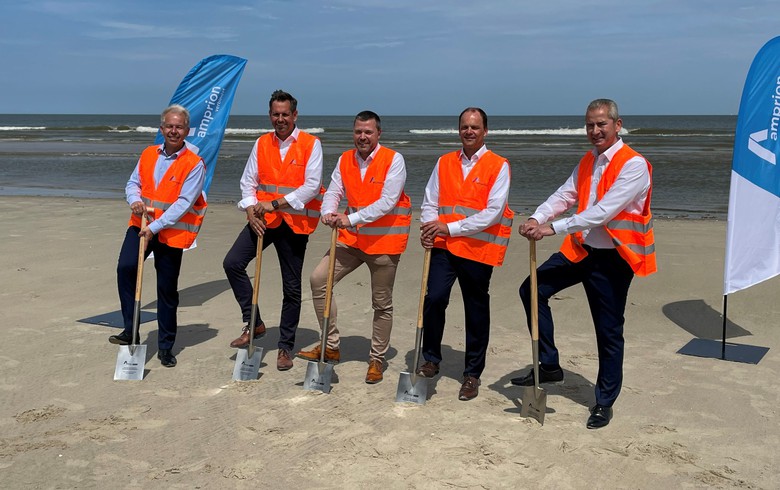 The groundbreaking ceremony for the DolWin4 and BorWin4 offshore grid connections on the German coast. Image by Amprion GmbH.

The construction of the company's first offshore projects began with the drilling to cross below the island of Norderney, Amprion said on Monday.

The groundbreaking ceremony took place on Norderney's North Beach, Lower Saxony, and was attended by the state's Environment Minister Olaf Lies, Amprion employees and representatives of local authorities and organisations.

This summer between mid-July and end-September, Amprion plans to drill a length of around 1,100 metres from the centre of the island in the direction of Nordstrand. This includes the first four of a total of twelve horizontal wells in the coastal sea.

DolWin4 and BorWin4, each of 900 MW, will connect offshore wind parks in the North Sea and are due to become operational in 2028 and 2029. The two projects include the installation of 60 km (37.28 mi) and 125 km of underwater cables as well as 155 km of underground cables from the North Sea coast to the substation in the town of Lingen, Lower Saxony, where they will be connected to the grid. The DolWin4 and BorWin4 connections are meant to replace the Emsland nuclear power plant in the region which will be switched off at the end of 2022.

"DolWin4 and BorWin4 are at the beginning of a series of offshore grid connections that our company will realise in the coming years," said CTO Hendrik Neumann.

The grid operator is currently planning five offshore links and others have already been confirmed in the grid development plan. The company in May unveiled a plan to invest EUR 12 billion (USD 12.15bn) in the transformation of Germany's energy system until 2026.