US subsidies for renewables fall 56% in 3 yrs 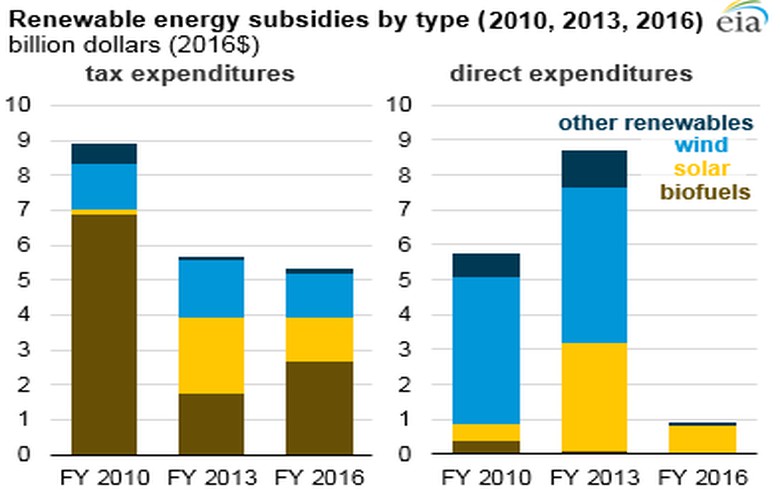 The drop in subsidies came as a result of a significant decrease in subsidies for renewable generation of electricity, from USD 13.4 billion to USD 3.9 billion. Subsidies for biofuels for transportation use, however, grew to USD 2.8 billion from USD 1.9 billion. This is according to the “Direct Federal Financial Interventions and Subsidies in Energy in Fiscal Year 2016” report by the US Energy Information Administration (EIA). It has been prepared at the request of Secretary of Energy Rick Perry for updated energy subsidy information needed for the study on grid resiliency. 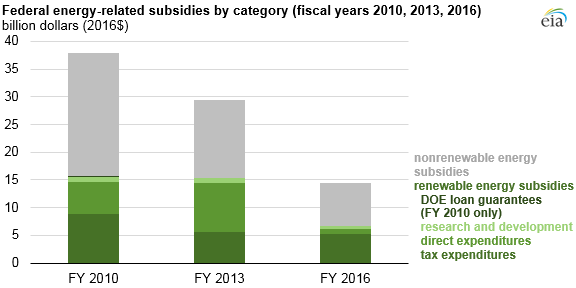 Federal subsidies for energy in the country come in the form of tax expenditures, direct expenditures, research and development (R&D), and credit subsidies to recipients of federal loan guarantees. The first category accounted for 80% or USD 5.6 billion of renewables subsidies in 2016. Biofuels are responsible for 51% of that, and then come the Production Tax Credit (PTC) and Investment Tax Credit (ITC) for large wind and solar parks.

The PTC and ITC credits taken in fiscal 2016 stood at around USD 1.4 billion and USD 1.2 billion, respectively, according to EIA’s calculations.

Direct expenditures for renewables fell to roughly USD 909 million in 2016 from nearly USD 8.72 billion in 2013 because support under the American Recovery and Reinvestment Act of 2009 (ARRA) decreased. Federal R&D expenditures for renewables almost halved to USD 456 million from USD 864 million, while federal loan guarantee subsidies amounted to zero in the years under review.

The table shows details on subsidies by technology.

The EIA report examines only federal subsidies and financial interventions targeted exclusively at energy markets that have an identifiable budget impact.