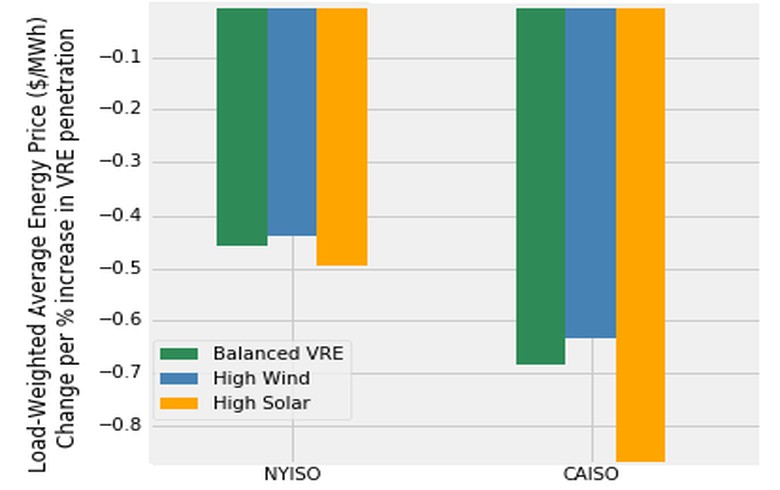 May 18 (Renewables Now) - Between 2.5% and 19% of all hours of the year could witness electricity prices below USD 5 (EUR 4.3) per MWh in four regions of the US in high wind and solar penetration scenarios developed by the Lawrence Berkeley National Laboratory.

Berkeley Lab this week released a report in which it analyses the impacts of high shares of wind and solar on wholesale electricity markets in California, the Midwest, Texas and New York, and on electric sector decisions. It compares scenarios with wind and solar shares of up to 40%-50% in 2030, to a low-variable renewable energy (VRE) scenario.

According to Berkeley Lab’s analysis, the high penetration of wind and solar in the energy mix leads to a number of “profound changes” in wholesale electricity price patterns. The laboratory says the most fundamental changes relate to the timing of when electricity is cheap or expensive and the degree of regularity in those patterns. Diurnal price patterns change significantly, especially if the share of solar power is high. The Electric Reliability Council of Texas (ERCOT) is one example of a market where high solar shares lead to a drop in prices in the middle of the day to an average of USD 10/MWh, while in the evening they rise to an average of USD 80/MWh.

In ERCOT Berkeley Lab also sees an extreme case with prices of USD 0/MWh for up to 1,300 hours, or 15% of the year. The lack of interconnection capacity with neighboring regions is one of the reasons for that extremity.

Overall, hours with prices below USD 5/MWh represent between 2.5% and 19% of all hours of the year in the high wind and solar scenarios.  The higher levels are observed in the high solar scenario. The average annual hourly wholesale energy prices, meanwhile, can go down by between USD 5 and USD 16 per MWh with greater VRE penetration, depending on the region and renewable energy mix. 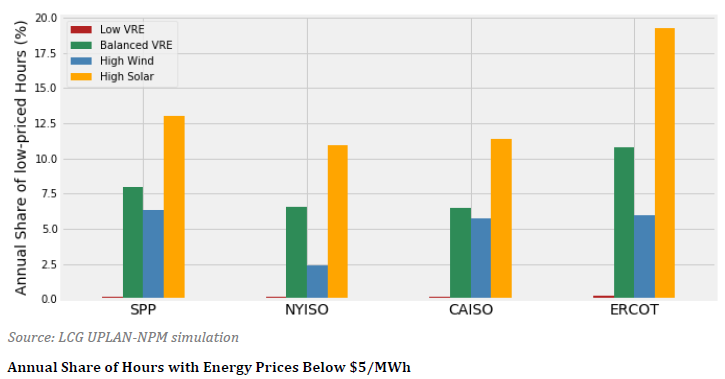 Such low-priced hours affect all participants in the electricity market. Flexible generators that can ramp down quickly can lower their variable fuel costs, while inflexible generators will sell power at a loss.

Price volatility is greater when there is more VRE on the grid and specially in the high wind scenarios, Berkeley Lab concluded. Also, ancillary service prices can jump with high VRE, especially for regulation and spinning reserves. Peak net-load hours are shifted over shorter time periods into the evening, but are distributed over more days of the year.

The full report is available at https://emp.lbl.gov/publications/impacts-high-variable-renewable.