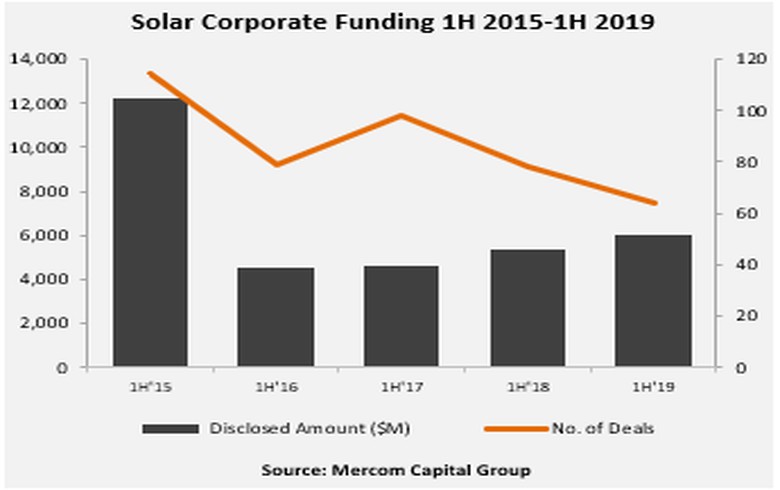 July 12 (Renewables Now) - Total corporate funding in the global solar sector rose to USD 6 billion (EUR 5.33bn) in the first half of 2019 from USD 5.4 billion a year earlier, according to the latest report by clean energy consultancy Mercom Capital Group.

The above mentioned figures include venture capital (VC) funding, public market and debt financing. Just in the second quarter of the year, corporate funding went up to USD 3.3 billion in 29 deals from USD 2.7 billion in 35 deals in the first quarter of 2019 and USD 2.9 billion a year back.

In the first half, global VC funding in the solar industry jumped by 50% year-on-year to USD 799 million. Among the largest VC and private equity deals were Indian renewable power producer ReNew Power Ltd’s USD-300-million fundraising, the USD-144-million equity infusion received by the clean energy arm of India’s Avaada Group, and the USD-65-million Series A financing round of UAE-based solar developer Yellow Door Energy. Mercom estimates that a total of 62 VC investors were involved in transactions in January-June 2019.

Solar public market financing during the six-month period declined by 20% on the year to USD 993 million in eight deals. Announced debt financing activity rose by 16% to USD 4.2 billion in 27 deals.

As per merger and acquisition (M&A) transactions, there were a total of 37 such deals in the first half of 2019 compared to 46 a year earlier. A total of 11.6 GW of solar projects changed ownership during the period, with investment firms accounting for 58% of the purchases in terms of capacity.