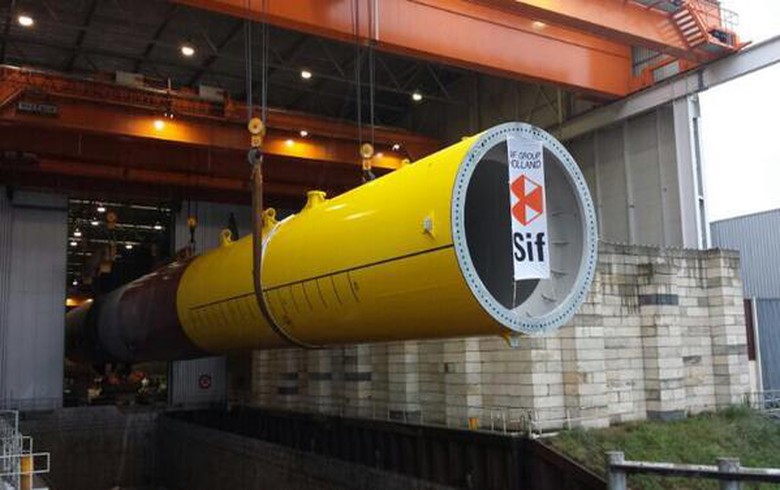 August 27 (Renewables Now) - Sif Holding NV (AMS:SIFG), the Dutch supplier of tubular components for offshore foundations, on Friday reported a drop in first-half EBITDA as the company was faced with underutilisation.

Chief financial officer and acting chief executive Leon Verweij said that Sif was forced to shed jobs as the anticipated underutilisation materialised during the first half of 2018 and especially in the second quarter of the year, the last few weeks of which saw zero production.

The company cut its temporary workforce and reduced its total staff to 450 employees at the end of the first quarter and then to around 320 at the end of the first half of 2018 from some 615 at the start of the year. "While production resumed in July 2018, this is not yet expected to result in any significant increase in the third quarter," Verweij said, adding that for the full year, around 50% of the maximum production capacity of 300 Kton is expected to be utilised.

According to the company, however, the outlook for 2019 and beyond is positive with an upcoming boom in the offshore wind industry. "Our order book is filling up with 200 Kton for 2019 and 90 Kton for 2020, and we are seeing a healthy flow of projects which can largely cover the remaining capacity for next years," Verweij said.

In the first half of 2018, earnings before interest, tax, depreciation and amortisation (EBITDA), adjusted for initial public offering (IPO) costs, dropped to EUR 14 million (USD 16.3m) from EUR 33.7 million a year ago. Contribution, defined as revenues minus cost of sales, fell to EUR 45.6 million from EUR 74.4 million, while total throughput was down to 81 Kton steel from 108 Kton in the first half of 2017.