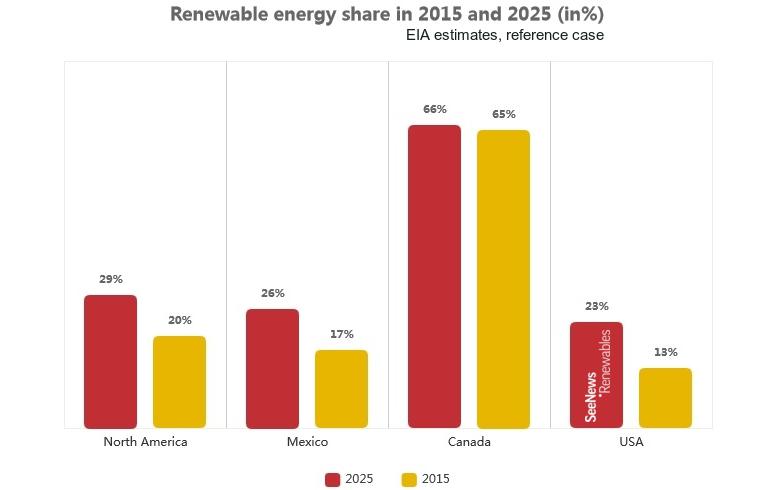 August 2 (SeeNews) - The share of renewables in North America’s electricity mix will expand to 29% by 2025, while that of nuclear will decline to 16%, according to a reference case projection by the US Energy Information Administration (EIA).

The US, Canada and Mexico announced in June they will strive towards a 2025 regional goal of 50% clean power generation by relying on renewable and nuclear power, carbon capture and storage technologies, as well as on energy efficiency.

EIA’s reference case envisages a significant increase in the use of renewable power in the US by 2025. Its share is seen to grow to 23% from 13% in 2015. The scenario assumes that implementation of the Clean Power Plan (CPP) begins in 2022. Renewables are fuelled by the extension of tax credits, significant cost reductions, and recognition of future CPP requirements.

Thanks to its hydropower resources, Canada had achieved an 80% clean energy share in 2015. The country wants to add more hydro by 2025, in addition to boosting its wind and solar capacity. Still, the combined share of renewables and nuclear in Canada's total generation is seen dropping to 75% by 2025 (66% renewable) because it will use more natural gas then and retire existing nuclear capacity.

In Mexico, EIA expects a rise in generation from hydro, wind, and other renewable power plants, and a reduction in the use of fossil fuels. By 2025, Mexico will grow its renewable energy share to 26% from 17% in 2015.