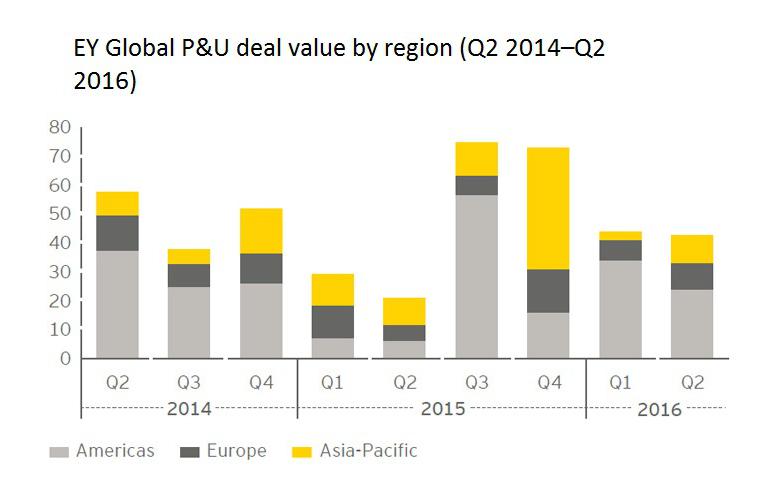 August 19 (SeeNews) - Buyers focused on renewables and regulated assets led a 105% increase in global power and utilities deal value in the second quarter of the year compared to the same period in 2015,  Earnst & Young (EY) said in its Power transactions and trends Q2 2016 report, published yesterday.

The move toward cleaner sources of energy in most developed countries combined with an urgent need to meet soaring demand in emerging markets is driving investment in renewables in all regions.

“Ongoing sector and global volatility continues to be at the forefront of investors’ minds. In the second quarter we saw this play out in the form of buyers seeking safe bets in renewables, where demand continues to rise in developed and emerging markets, and regulated transmission and distribution assets that offer stable, long-term returns,” Matt Rennie, EY Global Power & Utilities Transactions Leader, commented.

“The trend toward investment in disruptive technologies is also gathering pace. Both utilities and non-traditional investors are shifting their focus to areas like distributed energy and battery storage. And, as consumer demand increases, more M&A will follow,” Rennie added.

Deals involving renewables and regulated assets accounted for 52.3% (67 deals) of total deal volume, with a cumulative worth of USD 13 billion.

The Americas contributed the largest share of deal value in the quarter with a total of USD 24.7 billion. Mirroring the global trend, energy technology and rising adoption of renewables continued to drive sector convergence and M&A in the region.

Europe experienced a strong quarter with a 44% increase in deal value (USD 8.2bn) over Q2 2015 and a 10% increase over Q1 2016. Additionally, while utilities traditionally favor small- to mid-size bolt-on deals, two billion-dollar acquisitions from Chinese and Russian investors contributed 35% to the region’s deal value in the second quarter.

“The UK’s decision to leave the EU may impact M&A in the country and, potentially, across Europe. The full effect of the referendum won’t be clear, however, until the UK’s energy policy and position in the EU energy market unfolds. This is just one of many unknowns in today’s power and utilities sector. Transaction activity in the coming months will tell whether utilities are ready to take a chance on new avenues of growth or whether caution will prevail,” Rennie said.