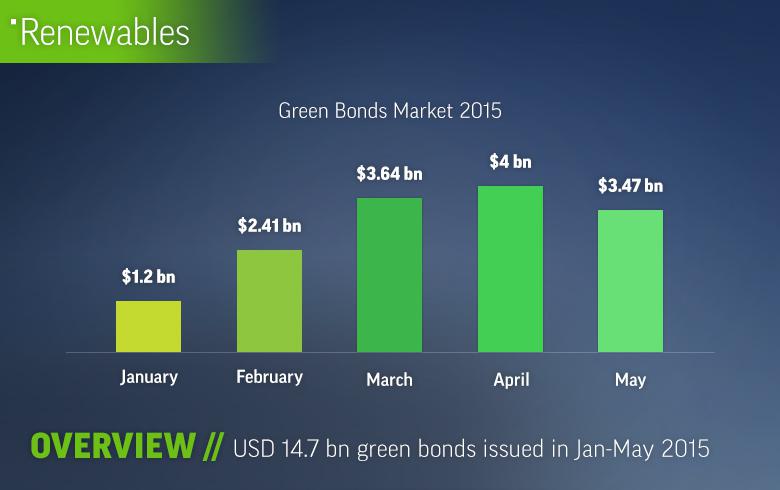 June 16 (SeeNews) - About USD 3.47 billion (EUR 3.1bn) of green bonds were issued in May 2015, including EUR 1 billion by transmission system operator (TSO) TenneT, which will use the proceeds to finance offshore wind transmission capacity.

According to figures by the Climate Bond Initiative (CBI), more than USD 14.7 billion of green bonds have been issued in the first five months of 2015. The not-for-profit organisation remains confident it will see USD 50 billion issued for the year and believes it is still possible to hit USD 100 billion. For comparison, in 2014 green bond issuance tripled to USD 36.6 billion.

TenneT Holding BV’s EUR-1-billion green bond is the largest issued so far this year and it was two times oversubscribed, the CBI pointed out. It included two tranches of EUR 500 million each, with terms of six and 12 years and respective coupons of 0.875% and 1.750%. An important investor was German development bank KfW.

MORE MAY BONDS FOR RENEWABLES

In mid-May, Bank of America Corp (NYSE:BAC) issued a USD-600-million green bond, its second, to finance renewable energy and energy efficiency projects. It has a term of 3 years and a coupon of 1.95%. “We believe green bonds will play an important role in closing the financing gap for renewable energy, energy efficiency and other lower-carbon projects,” commented chief operating officer Thomas Montag.

Estonian renewable energy firm Nelja Energia issued in May the first Eastern Europe green bond for renewable energy projects in Latvia and Lithuania. The EUR-50-million bond has a term of six years and a semi-annual floating coupon at EURIBOR plus 65 basis points.

An unlabelled USD-100-million bond was issued by Chinese company United Photovoltaics Group Ltd (HKG:0686), the proceeds from which will finance solar buys. “We’d welcome them to start labeling their bonds as green to improve discoverability for investors [..]” said CBI founder Sean Kidney.

The CBI is also expecting more solar bonds from US solar companies SolarCity Corp (NASDAQ:SCTY) and SunEdison Inc (NYSE:SUNE). SolarCity was the first issuer of solar asset-backed securities and has plans for more such transactions. SunEdison, on the other hand, intends to issue bonds to support acquisitions.

According to media reports, Goldman Sachs Group (NYSE:GS) is planning a USD-1-billion bond facility for investments in the Japanese renewable energy market. At first, the scheme will include only photovoltaic (PV) projects, but will be later expanded to add other green energy sources as well, Reuters said.