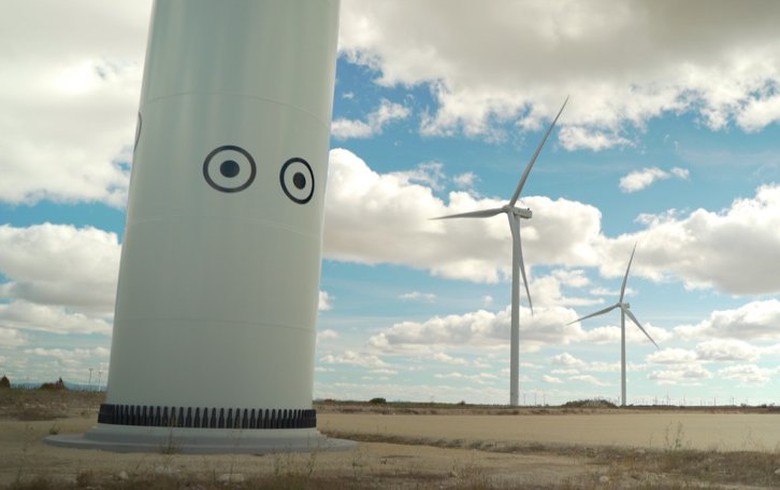 October 13 (Renewables Now) - Spanish utility Iberdrola SA (BME:IBE) is painting wind turbine blades in black and applying vinyl decals that look like staring eyes on some of the turbine towers in a bid to avoid bird collisions with its wind farms in Spain.

The idea to paint one of the turbine’s three blades in jet black is supported by a study done by the Norwegian Institute for Nature Research, which estimates that this measure decreases the number of bird sightings by 70%, Iberdrola said.

“The solution creates more contrast between the blades and makes them easier for birds to see”, says the utility.

Iberdrola’s team climbed 100 metres (328.1 ft) above the ground to sand, clean and paint the blades on three fully assembled wind farms in Spain, one of them the 111-MW Cavar in the northern region of Navarre. The task could only be performed when there is little wind and no rain, Iberdrola explained.

The second bird deterring solution consists of sticking black vinyl decal patterns in the shape of concentric circles on the white base of the turbine tower. These one-metre diameter circles, which look like a fixed staring gaze, are placed at between 3.5 to four metres from the base of the turbines.

This tactic was tested at the Lourdes-Tarbes-Pyrennes airport in south-eastern France and was found to be successful at deterring birds. According to Iberdrola, the number of birds of prey spotted around the airport dropped by 65% when the vinyl decals were used.

Iberdrola adhered the circles to more than 60 turbines at its seven wind farms in Burgos province.

The company said it plans to stick more of these decals at six different wind farms in Burgos, and is analysing the possibility of taking the method to other sites.