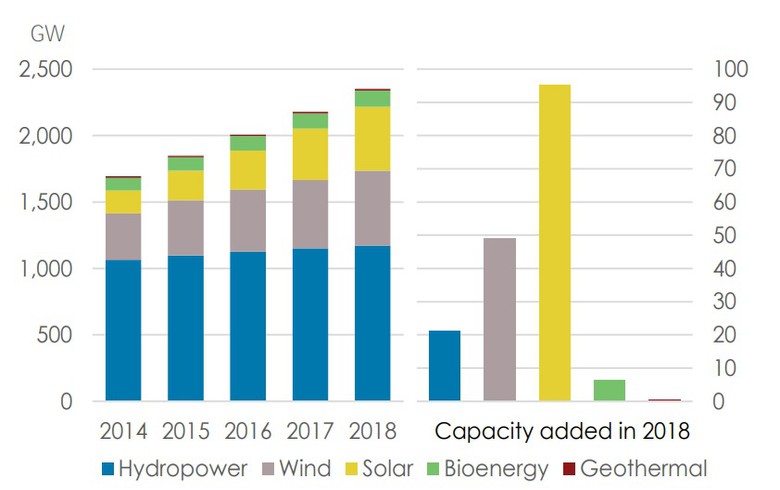 Annual capacity additions in the renewables sector increased by 7.9% on the year, led by wind and solar, which together accounted for 84% of the overall growth.

According to IRENA’s annual Renewable Capacity Statistics 2019, the world had 2,351 GW of renewable generation facilities at end-2018, representing 33% of the global installed power capacity. Hydropower remains the leader with 1,712 MW, while wind and solar parks total 564 GW and 480 GW, respectively. Bioenergy capacity at end-2018 stood at 121 GW, 13 GW was geothermal and 500 MW was marine energy capacity.

All regions of the world contributed to the capacity additions last year, IRENA said. Asia was the world leader with 105 GW of new installations, making it responsible for 61% of the total renewables additions. Europe added 24 GW and North America 19 GW. Oceania was the fastest growing region, expanding its renewables capacity by 17.7%. Capacity growth in Africa was 8.4% with some 3.6 GW of newly-commissioned plants.

In the wind sector, some 49 GW of new capacity went live in the past year. China and the US were the major drivers, adding 20 GW and 7 GW, respectively. Brazil, France, Germany, India and the UK each added more than 1 GW.

On the solar front, the world saw 94 GW of fresh photovoltaic (PV) capacity coming online in 2018. Of that 64 GW is in Asia, with four countries accounting for most of it -- China, India, Japan, and the Republic of Korea. New additions in the US were 8.4 GW, Australia added 3.8 GW and Germany 3.6 GW. The list of countries with significant expansions includes Brazil, Egypt, Pakistan, Mexico, Turkey and the Netherlands.

In the bioenergy segment, three countries delivered more than 50% of the new capacity: China installed 2 GW, the UK 900 MW and India 700 MW.

The geothermal sector saw the addition of 539 MW of capacity, most of which came from Turkey, where 219 MW we built, and Indonesia with 137 MW of capacity additions.

“The strong growth in 2018 continues the remarkable trend of the last five years, which reflects an ongoing shift towards renewable power as the driver of global energy transformation,” said IRENA director-general Adnan Z Amin. He added, however, that even faster growth is needed to ensure that the global climate objectives and sustainable energy goals will be reached.