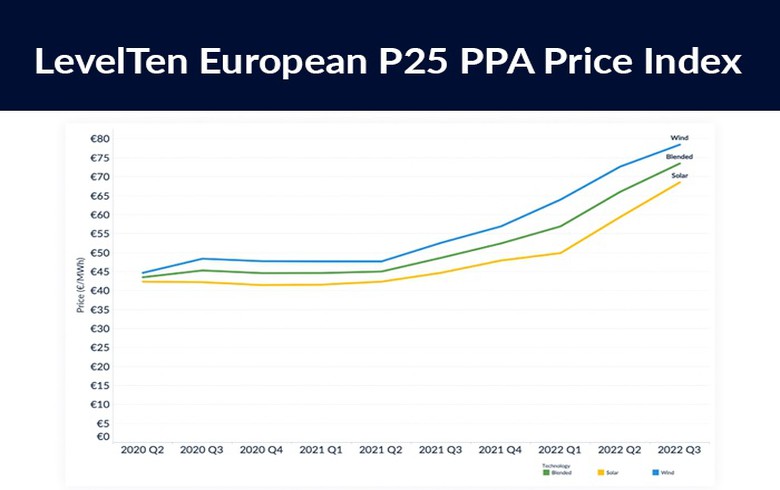 Europe’s energy crisis rages on, causing third quarter P25* solar and wind power purchase agreement (PPA) prices to soar 11,3% to EUR 73.54 per MWh, according to a new report from LevelTen Energy, a renewable energy platform and operator of the world’s largest PPA marketplace. European PPA prices are now 51% higher than the same period in 2021.

European energy markets are being stress-tested as the region simultaneously tackles two major challenges: figuring out how to rapidly establish energy independence from Russia, while also transitioning to a carbon-neutral economy by 2050. This has led to eye-watering wholesale electricity prices — north of EUR 500 per MWh in some markets — and a resulting boom in PPA demand as large energy consumers try to insulate themselves from high energy prices with long-term, fixed-price energy contracts.

“Corporations can use PPAs to stabilise their energy costs, meet their emissions reduction targets, and demonstrate their commitment to sustainability and energy independence,” said Flemming Sorensen, VP, Europe, LevelTen Energy. “That’s why despite higher PPA prices, we’re still seeing strong demand for PPAs. LevelTen has run almost three times as many RFPs as last year on behalf of offtakers seeking PPA contracts. The challenge is that supply can’t keep up because of permitting and interconnection issues. And now, because of high wholesale electricity prices, developers have more options to finance their projects outside of PPAs, which further limits supply.”

Solar PPA prices rose almost twice as much as wind prices: Solar P25 PPA prices rose 15.4% to EUR 68.57 per MWh, while wind P25 PPA prices increased by 8% to EUR 78.50 per MWh. This trend was driven in part by steep solar price surges in markets such as Germany, Greece, Hungary, Italy and the UK. The renewable energy industry is paying close attention to the UK’s Review of Electricity Market Arrangements, which could have implications on project costs, locational risks for generators, the ability for generators to sell their full capacity to the market, and PPA settlements; LevelTen dives into these proposals and their potential impacts in the full Q3 report.

Spain, Greece and the UK had the highest supply of PPAs in Q3: Solar accounted for most of that supply as onshore wind projects continue to combat widespread permitting challenges. But hope is on the horizon: “EU initiatives to reform and accelerate the renewables permitting process should, over time, provide some relief,” said Sorensen. More supply may also come from Eastern Europe, where Romania’s renewable energy sector is maturing rapidly. Romania aims to add 6.9 GW of renewable capacity by 2030, and in October, the government launched an initiative worth EUR 457.7 million to incentivise the buildout of 950 MW of capacity.

Italian and Greek solar markets are becoming more active: Both the Greek and Italian solar markets continue to mature, leading to more PPA activity. “However, one of the ironies of such market development is an increase in interested buyers, which can increase competition and apply upward price pressure. We can see some of this in both markets this quarter, with Italian and Greek P25 solar prices rising by 28.2% and 32.1%, respectively,” said Gabriel Umana Gomez, Customer Success Manager, Europe, LevelTen Energy.

More clarity is needed on member states’ response to the EUR 180 per MWh revenue cap: In September, in an effort to collect funds that can be used to provide relief on electricity prices for consumers, the EU passed a temporary measure to limit the revenue of inframarginal generators, which includes wind and solar generators, to EUR 180 per MWh. Most existing PPAs won’t be affected by this cap because revenue will be calculated after contract settlements take place. More than half (58%) of European developers surveyed by LevelTen said that the revenue cap would only affect “a few projects,” while 21% said it would affect none. The revenue cap goes into effect on December 1 and expires after June 30, 2023, so projects reaching commercial operation after this period may not be affected. However, the measure also creates uncertainty in the market in two ways. First, member states will be allowed to set their own lower price caps. And second, member states can determine whether they will apply the regulation when the settlement of the exchange of electricity takes place, or thereafter. “We have seen this uncertainty cause some offtakers to pause on PPA activity until 2023, when hopefully more clarity emerges,” said Sorensen.

“The majority of PPA projects on LevelTen’s Energy Marketplace have commercial operation dates of 2025 and onward, so companies with emissions reduction targets of 2025 need to stay laser focused,” said Sorensen. “High electricity prices will incentivise developers to construct more solar and wind projects, eventually helping to alleviate the supply crunch. New regulations like the Corporate Sustainability Reporting Directive (CSRD) may soon be enacted, creating more accountability for companies’ claims around environmental impact. These developments will ultimately support Europe’s energy transition; the process of getting there feels uncomfortable but there is a light at the end of this long tunnel.”

*LevelTen’s P25 Price Index represents an average of the 25th percentile PPA price from each market. All PPA price data in LevelTen’s report are based on the prices that developers are offering for PPA contracts, not transacted PPA prices.