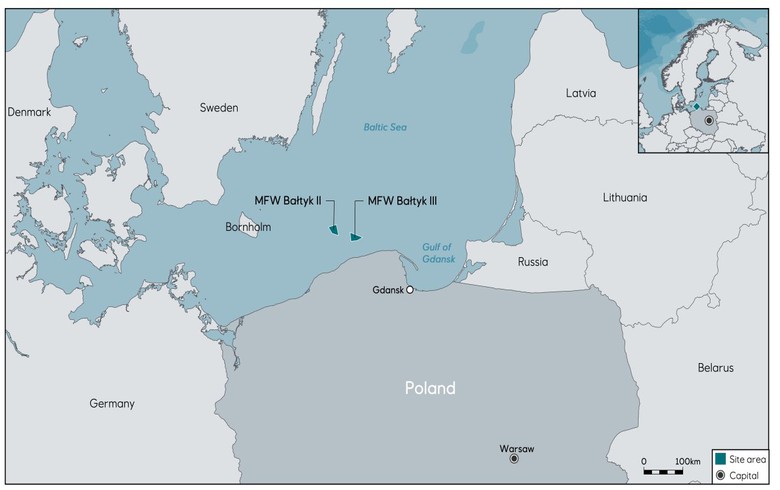 Location of the Baltyk II and III projects. Image by: Equinor.

The Polish Energy Regulatory Office (ERO) has granted a CfD for the two schemes at PLN 319.60 (USD 84.18/EUR 70.12) per MWh, for a maximum of 25 years. The award is subject to some adjustments and final approval from Polish authorities and the European Commission, Norwegian energy major Equinor said on Monday.

Each of the two projects has a power generation capacity of 720 MW. As part of their 50/50 joint venture (JV), Equinor and Polenergia have agreed for the Norwegian firm to navigate Baltyk II and III through the development, construction and operation phases. Polenergia, meanwhile, is in charge of securing all permits.

The duo plans to begin construction as early as 2024, after taking a final investment decision and having all permits in place. Once operational, the wind farms will be capable of producing electricity for around two million Polish homes.

The projects are among the first ones being awarded CfDs under the first phase of Poland’s offshore wind programme, which will provide subsidies for up to 5.9 GW of capacity in the Baltic Sea by 2030. Eventually, the mechanism will award 11 GW of projects by 2040.