EC approves up to EUR 5.4bn in state aid for H2-related IPCEI projects

IPCEI Hy2Tech, as the initiative is known, is the fourth to obtain clearance under the State aid framework for Important Projects of Common European Interest, but the first ever in the hydrogen sector in particular. Its goal is to help establish a hydrogen market in Europe and thus contribute to the EU’s decarbonisation agenda and the REPowerEU Plan.

Including private investments, the total funding under the IPCEI Hy2Tech is estimated to reach EUR 14.2 billion.

“Currently, there is no established hydrogen market in Europe. This makes it risky for companies or even Member States to invest alone in such innovative technologies. That is where State aid has a role to play to unlock, crowd-in and leverage substantial private investments that would otherwise not materialise,” commented Executive Vice-President Margrethe Vestager.

The 41 selected projects come from 15 EU member states: Austria, Belgium, Czechia, Denmark, Estonia, Finland, France, Germany, Greece, Italy, the Netherlands, Poland, Portugal, Slovakia and Spain. All of them fall in one of four technology fields: production of hydrogen; development of fuel cell technologies; storage, transportation and distribution of hydrogen; and development of technologies for end-user applications. 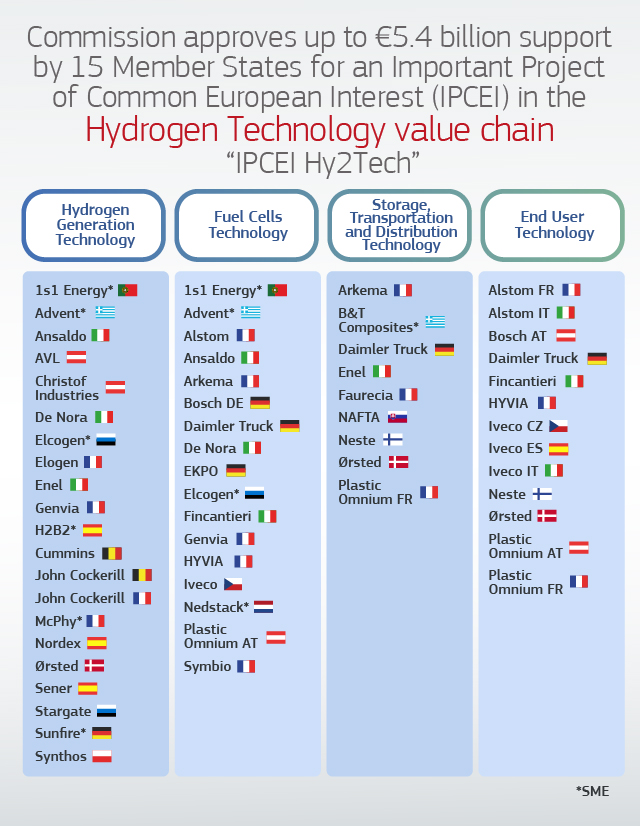