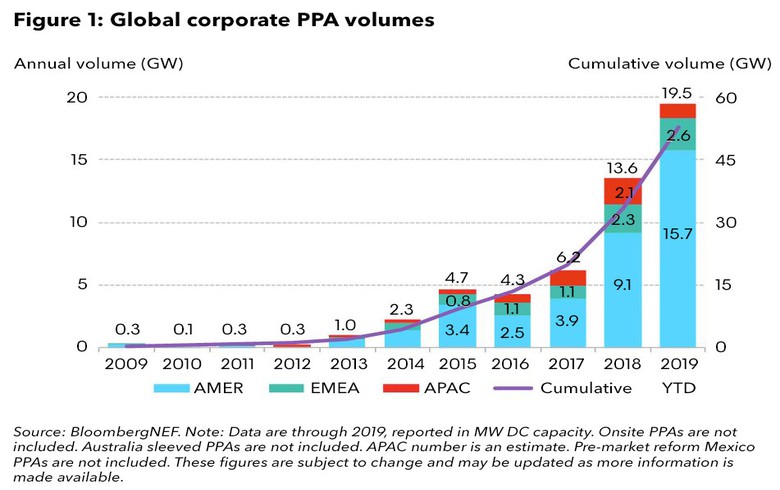 The 2019 total compares with 13.6 GW in 2018, which was also a record year for corporate PPA deals and is more than triple the activity in 2017. Over 100 corporations in 23 countries contributed to the new record figures, with activity being largely driven by corporates in the US. Corporate sustainability commitments around the world also helped the surge, BNEF said in its 1H 2020 Corporate Energy Market Outlook, adding that last year’s contracted capacity will entail investments of between USD 20 billion (EUR 18.2bn) and USD 30 billion.

“Corporations have purchased over 50 GW of clean energy since 2008. These buyers are reshaping power markets and the business models of energy companies around the world,” commented Jonas Rooze, lead sustainability analyst at BNEF.

The US was responsible for the bulk of the total corporate procurement activity in 2019 with 13.6 GW of deals announced, over 80% of which were from virtual PPAs. The year was also a good one for corporate PPAs in Europe, Middle East and Africa (EMEA) where 2.6 GW of power was contracted. In Europe, more companies joined the list of corporate purchasers in countries like Spain, Poland and France, while Italy made its debut. Activity in Latin America spurred and led to a threefold jump, with Brazil and Chile emerging as top markets.

Technology companies were the biggest buyers on the market, led by Google LLC and its commitment to purchase over 2.7 GW of clean power. Some of the other largest buyers were Facebook (NASDAQ:FB) and its deals for a combined 1.1 GW of power, followed by Amazon (NASDAQ:AMZN) and Microsoft (NASDAQ:MSFT) with contracts for 900 MW and 800 MW, respectively.

A highlight in BNEF’s report was the contribution of oil and gas companies. More players in this industry followed ExxonMobil’s suit from late 2018 and joined the list of clan energy buyers. Among them were Occidental Petroleum (NYSE:OXY), Chevron (NYSE:CVX) and Energy Transfer Partners.

Corporate sustainability commitments were also on the rise in the past year and were “a driving force” for the signing of PPAs. According to BNEF’s figures, almost 400 companies unveiled science-based sustainability targets and 63 more set a 100%-renewables goal.

”Sustainability commitments will ensure that clean energy procurement from corporations continues to thrive. The ball is in the court of utilities, policymakers and investors,” said Kyle Harrison, sustainability analyst and lead author of the report.