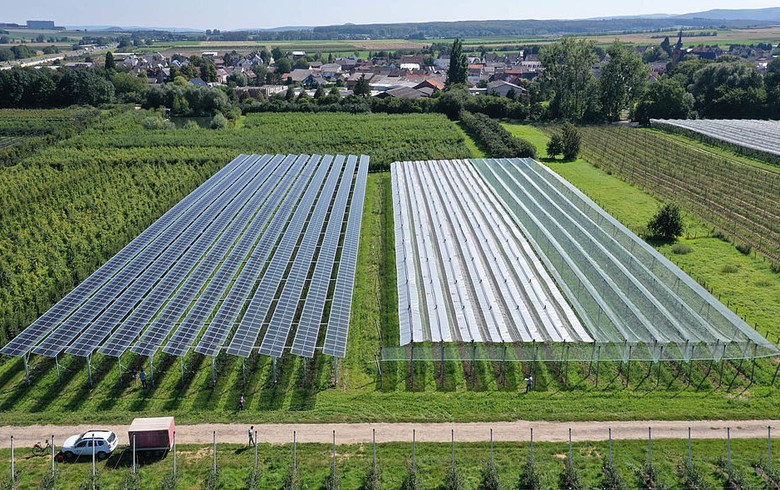 The Agri-PV research facility for apples in Rhineland-Palatinate, Germany. Image by BayWa r.e.

September 15 (Renewables Now) - Germany’s BayWa r.e. AG, the Fraunhofer Institute for Solar Energy Systems ISE and partners have built an agri-photovoltaics (PV) research site for apples in the north of the state of Rhineland-Palatinate to test whether such systems can provide plant protection against harmful environmental influences.

For a period of five years, the partners will explore the effect of different configurations of PV modules on the growing of eight varieties of apples at the Nachtwey organic fruit farm in Gelsdorf, BayWa said on Tuesday.

Another goal of the project is to investigate to what extent light management through changes in PV module configuration has an impact on plant growth and production.

The system, which BayWa claims to be the first of its kind in Germany, is located on an area of 9,100 sq m (2,249 acres) and PV modules with a total output of 258 kWp were installed on a third of the area.

"We see Agri-PV as a long-term solution to help farmers adapt to the consequences of climate change. We can preserve the existing ecosystem and even enhance it through synergy effects and solar power generation," said Stephan Schindele, BayWa r.e.'s Head of Product Management Agri-PV.

The project is financed by Rhineland-Palatinate's energy ministry and the federal ministry of food and agriculture.

The German company, which has already established berry cultivation under agri-PV in the Netherlands, sees considerable potential in the combination of PV modules and crops such as apple, pear, cherry and kiwi.